What is Matsuhi Bridge? The valuable heritage where the wisdom of our ancestors is utilized!

By the way, the excellent knowledge and skills that were created by accumulating the experience of old people, the so-called wisdom of our predecessors, can still be learned and useful.

Today, I will introduce a slightly unusual bridge that makes use of the wisdom and technology of such ancestors. “Matsuhi Bridge” in the Shimoarisu area is a bridge that is designed so that the entire bridge will not be damaged at the time of flood! 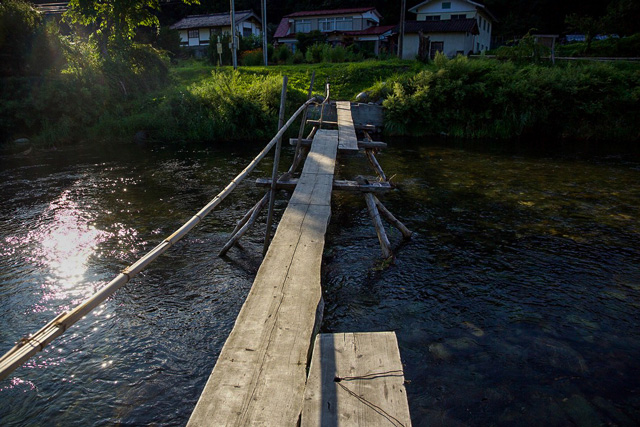 If you drive from the center of Sumita Town to the Shimoarisu area, you can see a slightly unusual bridge over the Kesen River. That’s “Matsuhi Bridge” that plays the role of connecting Nakayama and Matsuhi on the opposite bank!

In “the Genroku Ezu” produced in 1698, the road and village are listed on the Matsuhi side, and the paddy fields are listed on the Nakayama side. so it is believed that there was already it at that time due to the traffic between the village and the rice fields.

it actually has a slightly different characteristic from a normal bridge. it’s also called “flow bridge” and is designed so that the entire bridge will be washed away and not damaged at the time of flood. and also the members of the bridge are connected by wire ropes and wires so that they will not be washed away from both banks.

Piers play a particularly important role in the construction of such special bridges. Thick branches of walnuts and chestnut trees called “Zamaza” in this area are combined at a slight angle using the bifurcated part, and it is placed with a bridge board in the river.

It is stable due to the weight of the bridge board and the water pressure applied to the delicate angle of Zamaza, and it is not washed away in the normal flow. When the flow reaches the bridge board during a flood, the bridge board floats, and Zamaza collapses so that it can be caught by the foot without going against the flow, as a result, the entire bridge is washed away. This property prevents it from impacting water.

The valuable heritage where the wisdom of our ancestors is utilized! 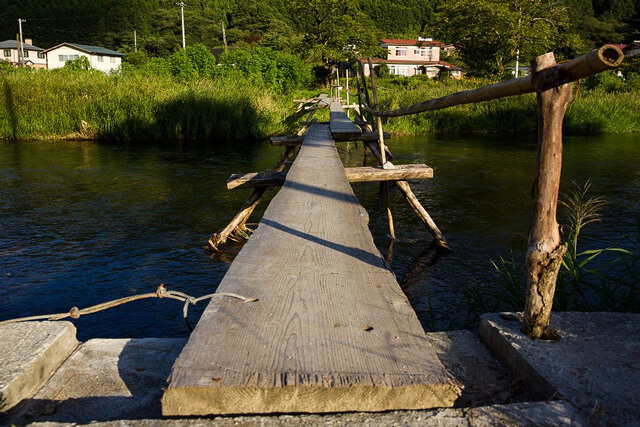 I was worried that there was an interesting bridge through this road several times. When I actually crossed “Matsuhi Bridge” that is also a flow bridge, the structure was solid and I could cross it with confidence with almost no shaking. It is surprising to think that this is made by making good use of the combination of Zamaza, the weight of the bridge board, and the force of water pressure.

It is also a bridge that makes use of the wisdom and ingenuity of our predecessors, which makes it easier to rebuild by flushing the entire bridge and reducing damage. Actually, it is the only bridge that remains in its old form in the Kesen River basin, so considering these things, it is not only still functioning as a bridge, but also a valuable asset with historical and cultural value.

Why don’t you spend a relaxing time enjoying the scenery of nature and the sound of the river while standing on the Matsuhi Bridge? The starry sky also looks beautiful at night.

In addition, there are famous places such as “Hayama Megane Bridge“, “Rokan Cave“, and “Kesen Otaki” in the vicinity!

What is Kesen Otaki? The fascinating waterfall created by th...

What is Rokan Cave in Iwate?You can see the mysterious view ...

HOME >  English Blog >  What is Matsuhi Bridge? The valuable heritage where the wisdom of our ancestors is utilized!